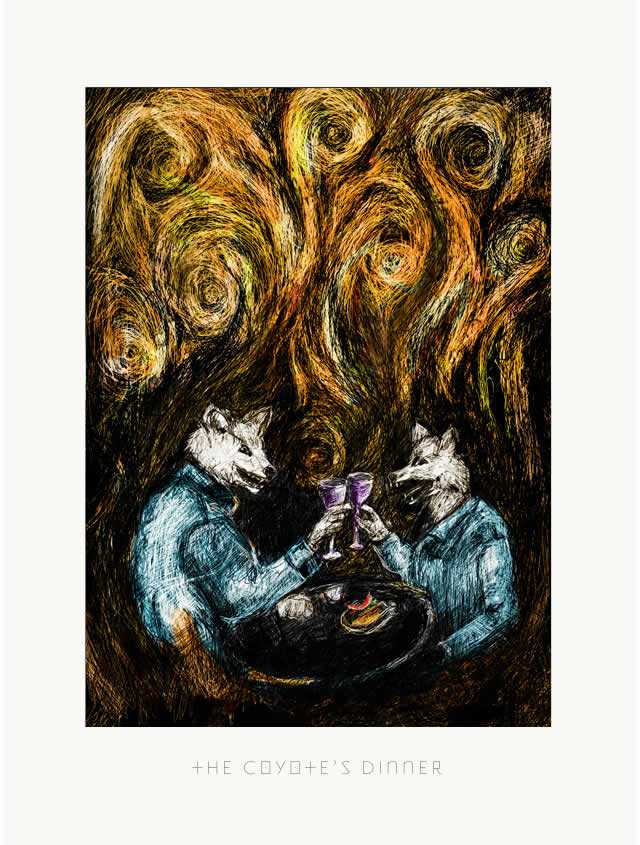 This print illustrates the final scene from the Yaqui fable, “The Coyote and the Rabbit.” This fable tells the story of a rabbit, who escapes her hunter by employing the same sort of trickery that her hunter is known for. The Coyote sits in pleasure with himself, waiting for the feast that will never come to be.

The Fable of the Coyote and the Rabbit

ONE DAY rabbit was out on a plain eating when Coyote came up. “I am very hungry,” said Coyote. “I am going to eat you.”

“No, wait here and I will bring you a really good meal of chicken. They are cooking it over there.” Rabbit ran off toward the monte and Coyote happily waited, singing in anticipation of a fine meal. He waited a long time. At last he became angry and followed the tracks of Rabbit.

He found Rabbit in an arroyo standing by the cliff wall holding his forepaws against the cliff. “What are you doing?” asked Coyote.

“I am holding this cliff up,” said Rabbit. At that moment a little rock fell and he held the cliff up harder than ever. “Here,” he said to Coyote, “you hold it up while I go and get the food I told you about. It is almost ready.”

Coyote put his paws against the cliff, pushing desperately while Rabbit ran off. Another rock fell and Coyote pushed all the harder. He waited for a long time. He was very tired and terribly hungry. Suddenly he let go of the cliff and ran as fast as he could. Nothing happened. He followed the tracks of Rabbit.

’Now I really am going to eat you!”

“Just sit down,” said Rabbit. “They are going to bring that food right here. They’ll be here soon.” So Coyote sat down, looking hungrily at Rabbit. Rabbit jumped up saying, “I’ll hurry them. You wait here just a minute.” He ran off. Coyote waited.

Meanwhile, Rabbit set fire all around the edges of the thicket. Then he ran back to Coyote. “Hear the cohetes?” he shouted to Coyote. “The fiesta is coming. They are bringing you a wonderful meal.” Then Rabbit ran away as fast as he could to avoid the fire. Coyote happily danced and sang as he waited for his meal. The fire soon surrounded him and he was burned up.