Chaos is a natural state, full of creativity, energy, spontaneity, and life, which is much more desirable than order, which is static, lifeless, predictable, boring, and dead.

We‘ve been taught our whole lives that “order” and “organization” are better than “chaos.” Don’t get me wrong, or take the entire concept of this essay in the wrong way. Order can be great—we like it when things are organized, and when lines are straight. We spend a lot (maybe even a butt-load) of money and time organizing and making rules to keep things straight and in order.

It‘s my goal in this essay to prove to you that chaos is your friend, and at times it can even be WAY more impressive than order.

Chaos is the opposite of order, but it’s not on the same thing as good and evil—( like it’s sometimes made out to be).

Good and evil have their own axis, and there can be good chaos, and order can sometimes be the bad guy.

“Order” is about organizing, lining things up, measuring, and controlling things. People who like order like to able to measure the amount of control they have on everything around them.

“Order” can also be a good thing, especially when items are ordered in ways that make our lives better.

You may have spent a lot of time organizing your star wars action figure collection, and that is fantastic.

An order can also be a bad thing—when too many things are organized in ways that make our lives difficult or painful. It’s NOT OK if someone else arranges your action figures!

It is also NOT OK if someone organizes a death star attack that destroys your home planet.

And this is the rub - the bad guys can be just as good at organizing as the good guys.

The order of the dark side

The worst thing you can do to anything or anyone is to compare it to Hitler - so, yes, I’m going to go there and compare the dark side of order to Hitler.

Adolf Hitler organized the NAZI party in 1920 and led a very organized effort to destroy an entire race and nearly conquered all of the European Continent in the process.

“ I know perfectly well that in the scientific sense there is no such thing as race. As a politician, I need an idea which enables the order which has hitherto existed on a historic basis to be abolished and an entirely new order enforced and given an intellectual basis. And for this purpose, the idea of race serves me well.” –Adolf Hitler

When we have too many rules, and when we try to control too many things, it almost always ends in the worst way…

The order of the mullet

There are also organization types that people think are good, but are really not. We can refer to this type of order as an “Organizational Mullet,” or as “The Order of the Mullet.”

Even when it’s dressed up, a mullet is still a mullet.

Hair does not grow naturally in a way that would become a mullet. They are very intentional and organized to obtain a specific look. This type of order can be found everywhere—attempts to organize things that are otherwise naturally right end up being terrible.

The cost of Order

Another problem with Order - is that it takes lots of work and a tremendous amount of energy - it is expensive. If you want things to be organized, you have to do it yourself, pay people money, or enslave others to arrange things for you.

Whenever we organize things, and the more perfectly we organize it, the more it wants to propel itself back to chaos. (entropy). When you hang a picture, it always gets crooked.

In 1961, a meteorologist named Edward Lorenz was trying to discover ways to predict the weather better - he found what is now known as the butterfly-effect—the idea that small changes in initial conditions produced considerable differences in the long-term outcome, and subsequently that long-term weather prediction would be impossible. This became one of the foundations of Scientific Chaos Theory.

The thing that we have to realize is that whatever our plans are, there’s a butterfly somewhere who has already set into motion a chain of events that eventually destroy everything you’ve worked for.

But… chaos is not a bad thing—it is a good thing. Just like things that are organized want to fall apart, things that are in chaos wish to be organized. If you hung a picture intentionally crooked, someone will eventually come along and make it straight.

Just as the perfectly organized room contains stored kinetic energy waiting for every opportunity to be propelled into chaos, chaos contains vibrant living energy that is waiting to organize itself (enthalpy).

Chaos is the way that nature is put together. Our attempts to tame and control it are almost never successful. When we leave it alone, life seems to take care of itself.

Chaos is easy. Typically you don’t have to do much at all to introduce chaos into any system. If you give anything organized enough time it will eventually find its way to a state of total chaos.

Chaos is entirely flexible—you can’t break it. Chaos can bend and not break. Organization typically only works under the conditions it was organized for. If those conditions change, it will no longer function as intended.

Chaos is more like liquid, it molds and fits its shape to whatever it needs to and is quick to change when the conditions require it. 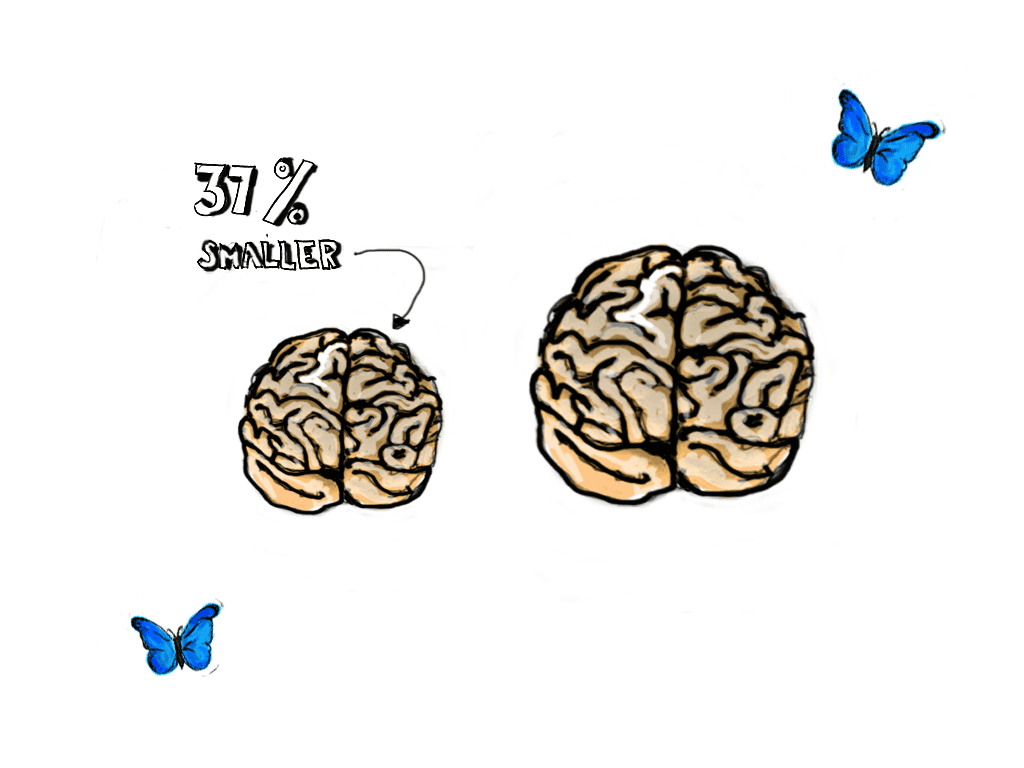 It has been scientifically proven that intruding a little bit of chaos in your day can make your brain grow.

As you can see from this graph, on average, we spend billions of dollars organizing, while the cost of chaos is a mere 7.32 cents. 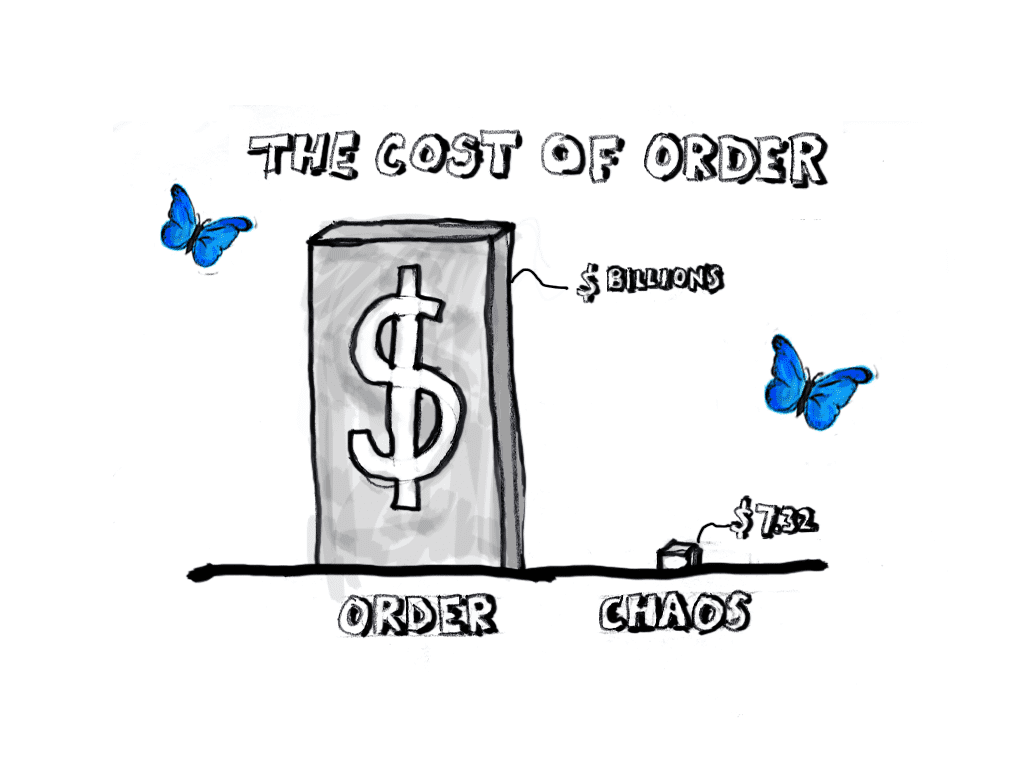 It also requires no slaves.

We’ve all heard about how important it is to “get-out-of-the box.” - boxes are used for organizing, and in Chaos, the idea of a “Box” actually does not even exist. 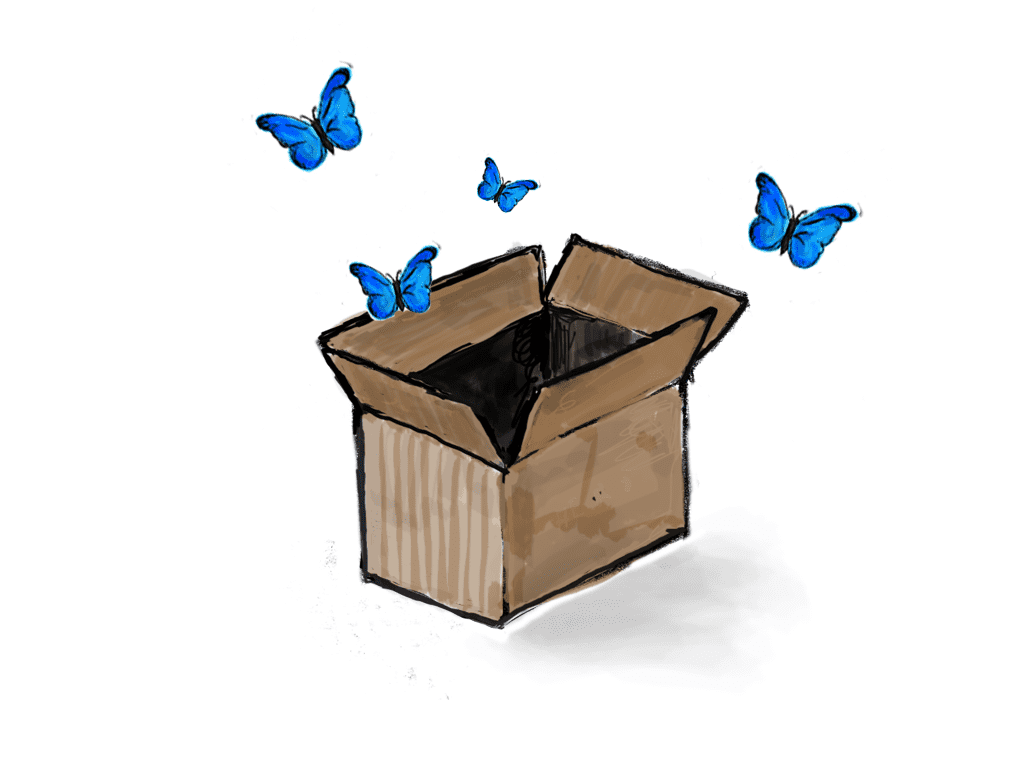 Chaos is alive and vibrant - when we organize things, we introduce rules that define boundaries. Chaos, on the other hand, is unbound, it moves, it generates, it grows without limits.

Chaos is infinitely sustainable. If we want things to be sustainable, at some point, we have to concede that chaos must enter the equation.

You need more chaos in your life.

And that’s why the next time you think you need more organization and order in your life, maybe what you actually need is a little bit more Chaos.